Menu
We're an affiliate Just so you know, we may collect a share of sales from the links on this site/page.

As leisure battery technology has evolved over the last few years it has resulted in variants of the traditional caravan or motorhome battery.

There is no longer just one type to buy and this throws up many questions, like what do these numbers mean on the battery, will this power my van for a weekend away and why are some more expensive than others?

Hopefully this article will give you the knowledge as to what to look for in not too technical jargon and allow you to find the best leisure battery for caravans or motorhomes.

A Leisure battery is a term given to a certain type of battery that is more suitable for the caravan, motorhome or marine use. They are 12volt and are used to power things like the lights, pump or a heating fan in your van. The way that they can release energy over a longer period is ideal for a caravan or motorhome as day to day running does not need a high output from the battery.

This is a summary of the most common types of leisure battery, they all do the same thing but are manufactured in different ways:

Lead acid or “deep cycle” leisure battery – These are standard leisure batteries, if no other information is given about the construction of the battery it will be a lead acid.

This is our “Best Buy” standard lead-acid leisure battery. Platinum are a well established brand that is approved and verified by the National Caravan Council.  Stocks are running low due to Covid19!

This is our pick for an AGM battery. Its from Platinum Batteries again and gets a “class A” rating from the Caravan Council meaning its classed as a high capacity battery that’s capable of running motor movers etc without any issue. Currently in stock on Amazon.

Can I use a car battery?

You could use a car battery to power your van but due to the way they are designed it would not last very long.

Car batteries are made to give a lot of energy for a few seconds to start the car whereas leisure batteries give their energy slower over a longer period. A car battery does not operate very well if it gets discharged, if this happens the thin lead plates inside it degrade due to sulphation. In its normal use once the engine is started the alternator is instantly recharging the battery back up to its full potential.

Can I just run things off the internal charger and not fit a battery?

If you were to use on site mains hook-up and not run off battery power the internal charger would power the van but what fitting the battery does is it acts as a “smoother” in the 12v system. If you turn something on that draws a lot of current there would be a spike of energy in the charger and due to the fact they are not designed to completely power a van it would eventually fail.

If you want to charge your leisure battery away from your van you will need a higher amp charger output charger (anything lower than 10amp charger will not charge a flat leisure battery). These CTEK chargers get good reviews and have 5/5 on Amazon at present. 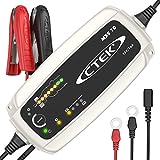 What do all the numbers and letters mean?

Ah – The first number you will see is the Amp hours of the battery or Ah. Amp hour is a measure of battery capacity or how much energy can be stored in it, the higher the number the more it can store.

MCA – Marine Cranking Amps, this is another test from another standard similar to a car battery which states CCA Cold Cranking Amps – how many amps it can deliver in an instant. Some batteries are capable of being a leisure battery and can be used as a starter battery.

Watt Hours – Watt Hour (Wh) is a unit measurement of power over an hour. A Wh is voltage multiplied by how much current (Amps) the battery can provide in an hour.

Cycles – This means the number of times the battery can be discharged to 50% and then fully recharged.

What size Ah battery do I need?

If you do more wild camping where no mains hook-up is used go for the highest Ah battery you can afford/fit. You can work out how many Amp hours you use on every piece of equipment, like this:

If you mainly use hook-up then choosing a bigger battery is not so critical.

Other factors when choosing a battery....

1) Check the warranty length on the battery some go up to 4 years, this shows a bit of confidence from the manufacturer and is something to bare in mind.

2) Most leisure batteries tend to be a standard–ish size and fit in a caravan exterior battery locker but there are a few oddball gel batteries that throw that out the window, always double check sizing if possible.

3)Due to the overwhelming number of battery sizes and styles the NCC (National Caravan Council) launched a scheme a few years ago that aims to simplify things. They teamed up with manufactures and selected certain batteries that they approve of and gave them a “verified” logo. They also gave their “verified” batteries a three-tier rated system:

Class A – High capacity battery designed for users who tend not to use hook-up very often.

Class B – For users who use mains hook-up mostly but have also require the larger capacity at times, for things like motor movers which can take a lot of energy from the battery.

Class C – For users that require a smaller capacity battery to operate the basics in their van or are away from hook-up for short periods of time.

Manufacturers that have adopted this scheme include Yuasa, Banner, Exide, Platinum and DBS Energy. It’s something that can provide a bit of reassurance.

A Worthy Mention is this battery from Superbatt. It is a standard lead-acid 120Ah leisure battery that is maintenance free but blurs the lines between a leisure battery and a engine battery as its able to give out momentarily 800 cranking Amps (CCA). Which is more than enough to start most diesel engines! A 2 year warranty and excellent reviews too!

After investing in battery, you are probably going to want to keep it in good health. This can mean checking the acid level if your battery has the removable caps and topping up with de-ionised water, if you can see the plates inside the level is too low! There will usually be plastic prong inside showing what level it should be.

The battery should also never be allowed to go totally flat (down to a few volts) as in some cases they never recover and a new battery will be required. If the van is going to be left over winter or long periods disconnect the battery as there is always a small voltage drain. Ideally charge it occasionally just to keep it healthy but never leave it constantly connected to the charger.

To check the voltage correctly of your battery, disconnect from the van and let it sit for 20 mins or so if it has been on charge (to stabilise). Then use a volt meter across the terminals for an accurate reading, the reason for using a voltmeter is than there is always voltage loss by the time the vans control panel gives you a reading. Also, some vans use cheap voltmeters that are just a guide more than anything.

If you are finding your battery smells (usually a rotten egg smell) or the battery is getting hot, it’s a sign that something is not right! This is normally caused by a battery that is at the end of its life and will not take a charge or the charger is over charging. Check with a vault meter on the battery terminals to see what voltage is being put in to the battery, for a standard lead-acid it should be no more than 14.2volts.

I hope this has given you some knowledge to help you chose a leisure battery or if not just broaden your understanding.

Some handy links for more information.

As some leisure batteries weigh up to 25kg my article on caravan weight distribution may be of some interest, Click Here to view.

Check out some of our other articles...

Please note these are the words and opinion of the author only. Neither the author nor the website can be held responsible for any errors or omissions. You should seek professional assistance if in doubt. 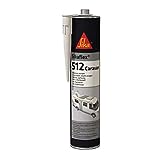 Motorhome reversing camera guide with pro’s and con’s of each variant.

A guide to Caravan Aerials

Motorhome and Caravan Sealant, which sealant is best for your van?

We use cookies to ensure that we give you the best experience on our website. If you continue to use this site we will assume that you are happy with it.Ok